AUV Adventures in NH, as told by Intern

As a CSHEL intern, I had the exciting opportunity to head up to the Center for Coastal and Ocean Mapping (CCOM) at the University of New Hampshire to get more experience with our autonomous underwater vehicle, an underwater robot usually referred to as an AUV. At CCOM, research engineer Val Schmidt is involved in many seafloor mapping projects. Val also works in partnership with CSHEL, acting as the chief engineer of our operations. Masters student Justin and I spent several days working with Val, testing the functions of our AUV's modules and ensuring that it is working correctly. The bench tests we performed are in preparation for AUV Boot Camp in August, a workshop hosted by CCOM and CSHEL where scientists, developers, and students will gather to optimize the collection of bathymetric data via the AUV. As an undergraduate at the University of Delaware, I've had no prior experience with AUVs, seafloor mapping, or most of the exciting things that the folks at CSHEL and CCOM get to do. But I'm diving in headfirst- pun intended- and I'll share what I've learned in the past several days right here.

We arrived at CCOM early last week. Armed with a Ford Expedition and a massive trailer, we lugged all of our gear from CSHEL in Delaware up to New Hampshire. On Wednesday, we began assembling the AUV. I had heard much about our AUV and its past travels, but had never seen it when it wasn't dismantled. Val instructed Justin and I on some of the nuances in the robot's assembly that are absolutely crucial for its function. For example, its O-rings. 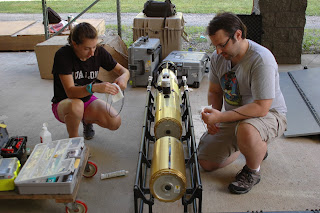 Each module of the AUV (ours has five at minimum) has two grooves that run along the circumference of the vehicle's connecting ends. O-rings will be placed in those grooves to create a watertight seal before the robot enters the water. After cleaning the connecting ends with Kimwipes and alcohol, we cleaned the O-rings in the same fashion and spread on a thin layer of lubrication. The lube causes the O-rings to slightly swell, allowing a tighter seal. Val stressed how important it was that we feel and remove any grit or small hairs. Hairs are the worst to have on an assembled O-ring; it may lie across the width of the ring and allow a path for water.

After O-rings were added to a module, Justin and I added the piece to the already connected parts. As each module was added, the AUV began to look more like an AUV! It also grew increasingly difficult to piece the two parts together as modules were added. Due to increasing weight and compressed air trapped within the vehicle, the last few modules seemed to be the most difficult. 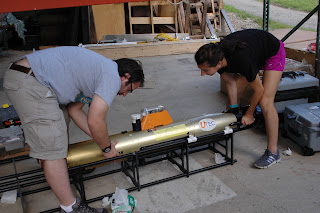 Once the AUV was assembled, we turned it on. Inserting a metal key into a designated keyhole on the command module starts the vehicle. The key remains in for the remainder of the session. As the AUV boots, the propellers go through a calibration process. Each of the four propellers moves back and forth, reaching its maximum range before stopping in the middle, at zero. Now the propellers sit, ready to begin a mission, in a north-south-east-west fashion. It is important to watch this zeroing process occur. If it does not occur, it could lead to errors in the AUV's function during a mission. 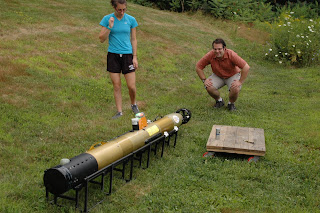 We launched the corresponding computer program on our Panasonic Toughbook (essentially a life-proof laptop), called Gavia Control Center. The Control Center is how we program and execute missions for the AUV, view depth, position, and other components, turn the vehicle off, and control a lot of other important things for the vehicle.

Next, we attached the magnetometer module- essentially a metal detector- to the vehicle to make sure it was working. The mag module detects metallic objects in close proximity by responding to local magnetic anomalies. Our mag module is appropriated for finding discarded ammunition, but can be utilized for finding other objects such as shipwrecks. Val placed his key ring near the mag module as Justin and I watched the AUV's stats in Control Center. We were able to see a large numerical jump and concluded that the mag module was working the way it was supposed to.

CCOM has an awesome high bay facility that includes a long wave tank and a general engineering tank. On Friday, we put the AUV in the six-meter deep engineering tank for an experiment. Essentially, we wanted to test how accurate the AUV's internal depth measurements are. Using state of the art duct tape engineering, we attached a measuring tape to the control module. We lowered the AUV into the tank, stopping at 20 inch intervals and recording the depth according to the measuring tape, along with the current time according to Control Center. 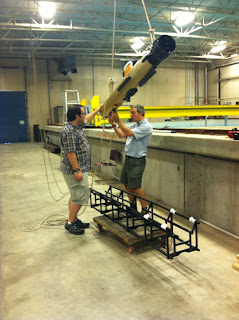 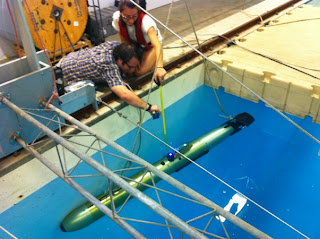 Later, we will go into those Control Center records and view the depths at each time we recorded. Hopefully, the measurements made internally by the AUV will be very similar to the depths we measured manually.

On Monday we headed over to the UNH pier, located about 20 minutes away in New Castle, New Hampshire. The pier is part of the Judd Greg Marine Science Research Complex, a satellite campus where students and faculty come to spend time offshore or utilize one of the marine laboratories. The pier accesses the Portsmouth Bay. The following two days would be spent aboard the R/V Cocheco, getting our AUV into ocean waters to run various missions. First, our objective was to ballast the AUV by adding or removing ingots. I learned how important it is that we properly adjust the buoyancy of the vehicle; too buoyant and it will not dive, too heavy and it will not resurface at the completion of a mission. Before dealing with the weights, we used a CTD instrument to determine the salinity of the water. CTD stands for conductivity, temperature, and depth- salinity is determined from a measure of the water's conductivity. Once we determined the average salinity (slightly above 30 PSS), we added the appropriate number of weights so that the AUV floated at the correct altitude.

Now that we had ballasted the vehicle, ensured that it was working properly, and made necessary adjustments, we were ready for cruises the next two days. I had learned so much up to this point, but had no idea how much things can change once the vehicle is at sea. In my next post, I'll recount our adventures aboard the R/V Cocheco! 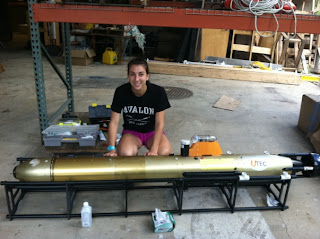 Posted by CSHEL_Blogsphere at 3:12 AM